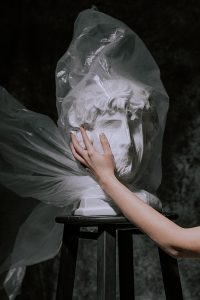 When I was at junior school, aged about 7 or 8, we were tasked with writing an essay about it*.

Obviously, there was no such thing as Google back then.

I sent a letter to the Gypsum Association requesting some information. It would have been a handwritten letter, probably in coloured crayon.

They sent me back an A5 brochure containing everything I needed to know.

It was the first official letter I’d ever received. At that age, the only other post I’d ever had would have been birthday cards.

I didn’t have high self-esteem as a child. I couldn’t believe this organisation had even bothered to reply to me. I was so impressed with them, and myself.

In more recent years, I’ve done a tone of voice project for a company that makes historical models.

I visited the warehouse, and was delighted to find there were bags of gypsum everywhere.

It was the first time I’d knowingly seen the stuff in its raw form.

My childhood memory was just one of the reasons I enjoyed that job so much. It being a big juicy long-term copywriting project was the other.

That story might even explain why I was drawn to copywriting as a career.

It’s the idea of helping people by providing them with the information they need. Making them feel happy and valued.

If you want to know the ‘why’ behind my copywriting business, maybe that’s it.

* What kind of school makes young people write about gypsum? You may well ask. It was St Philomena’s in Carshalton. I went there until I was 11.